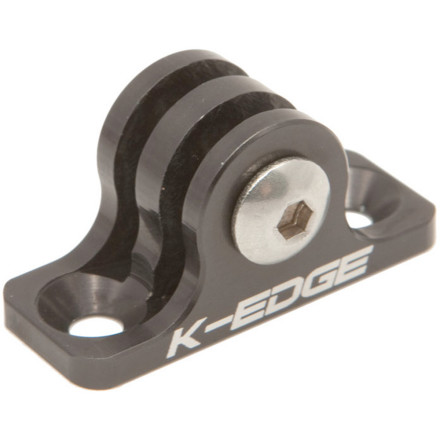 The K-Edge Go-Big Universal Mount is a simple and supremely durable mount for your GoPro camera in high-speed applications. Designed to mount flush with flat surfaces, the Universal Mount minimizes camera shake, and maximizes picture stability for your GoPro, even at velocities most of us wouldn't otherwise dare to surf, skate, drive, or ride. Bear in mind that while this is a screw-based mount, it's especially useful if using an adhesive to secure your GoPro camera to a flat and potentially jarring surface doesn't inspire the greatest confidence. K-Edge makes all their mounts right here in the United States in Boise, Idaho, in fact. The Universal Mount is CNC machined from 6061 T6 aluminum, and only weighs 11 grams. It mounts to most flat surfaces by countersunk screw, bolt, or rivet (hardware not included) with one-inch hole spacing. Rather than using your GoPro's included mount knobs for securing the camera to the mount itself, the Universal Mount utilizes a M5 bolt to keep things secure. K-Edge backs their mounts with a lifetime warranty. Choose between Black, Gunmetal, or anodized Red. - $24.99