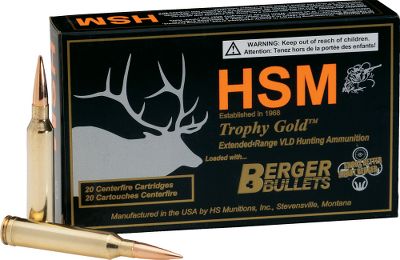 HSM teamed with Berger to create an exclusive line of rifle ammunition loaded with Berger hunting bullets, which were previously only available to handloaders. The VLD bullets penetrate between 2 and 3 before expanding and fragmenting, shedding 40% to 85% of their weight into surrounding tissue and organs to create a devastating wound cavity. Bergers OTM tactical bullets sport a slightly thicker jacket than the VLD bullets, allowing for greater penetration through bone and tissue before expanding and fragmenting. Because the vast majority of the energy from VLD and OTM bullets is expended inside the target animal, quick and humane kills are ensured. Made with Winchester brass, match-grade primers and new powders that are not affected by temperatures and altitude. Premium components result in consistent performance and match-grade accuracy. Per 20. Color: Gold. Type: Centerfire Rifle. - $35.99