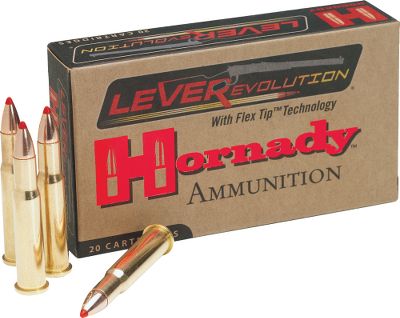 Hornady, a leader in ballistic innovation, now introduces a new line of ammunition for lever-action rifles that dramatically increases velocity, energy, trajectory and downrange terminal performance. Lever guns with tubular magazines have been hindered in the past by their inability to fire pointed bullets safely. Now Hornady has perfected the Elastomer Flex Tip bullet that can be safely fired from such rifles without fear of a chain reaction discharge in the magazine. The Flex Tip puts enough give in the bullet tip to prevent detonation of the primer ahead of it in the magazine. It also increases the ballistic coefficient of the round by using a pointed bullet design and permits the use of propellants that can turn popular 100-yard brush gun rounds into deadly performers at 200 yards and beyond. For example, LEVERevolution .30-30 ammunition shoots a 160-grain bullet that is 400 fps faster and has 400 ft.-lbs. more energy at 250 yards than conventional .30-30 ammo, and bullet drop at 300 yards is about 12 with a 200-yard zero. LEVERevolution similarly enhances the performance of other popular lever gun calibers and delivers up to 40% more energy compared to conventional flat-point ammunition. Join the LEVERevolution today. Per 20. Type: Centerfire Rifle Ammunition. - $24.99