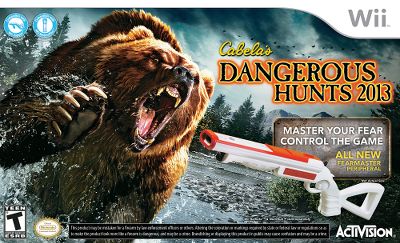 Can you hold your own against the most vicious beasts the animal kingdom has to offer? Cabelas Dangerous Hunts 2013 is more formidable and exciting than ever. The Prowler animal artificial-intelligence engine simulates pack social hierarchies and coordinates complex group hunting and attacking tactics, making for smarter, deadlier and more challenging predators. A new Maneater Co-op mode allows two players to join together to take on wave after wave of increasingly deadly threats. Can be played with standard game controllers or with the Top Shot Fearmaster firearm. Fearmaster sold only as part of the game bundle (not sold separately). ESRB Rating: TEEN with Blood and Violence. Note: Biometric heart-rate-monitor functionality is available on Xbox 360 and PS3 only. Available: Wii. Type: Video Games. - $43.99