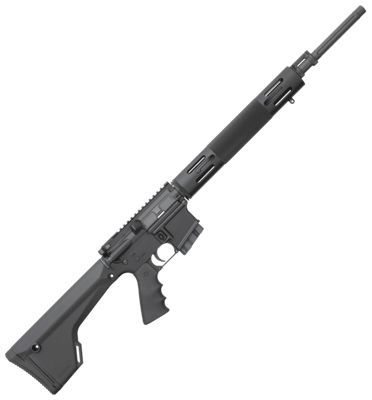 The Bushmaster Predator Rifle is a high quality, no nonsense AR-15 rifle made for predator hunting. To ensure accuracy the Predator features a free floated chrome-moly steel barrel, with a vented aluminum handguard that never touches the barrel to exert pressure during firing, thereby changing the barrel harmonics and effecting accuracy. The handguard is checkered providing a solid grip, and has a stud to attach a sling or bi-pod (not included). A flat top receiver with Picatinny rail provides a platform to mount optical sights with any standard Weaver or Picatinny rings (rings not included). The Predator's barrel is fluted to promote quicker cooling, and reduce weight; and has a rifling twist on one turn in eight inches to better stabilize long, heavy bullets that serious hunters prefer for predator hunting at long-range. To further promote the type of accurate shooting needed to hit small targets while varmint hunting at over 400 yards, the Bushmaster Predator features a two-stage competition trigger that is adjustable for weight of pull and overtravel. The trigger is light and crisp and will not slam fire during cycling of the action. The Predator features a fixed, rifle-length synthetic stock with an integral 1.25inch sling loop, and a rubber butt-pad that provides positive shoulder purchase to prevent slippage. The rifle shoots 5.56 or 223 ammo and accepts standard AR-15 magazines. The Bushmaster Predator is a superbly accurate, perfectly balanced AR-15 that handles well predator hunting in the woods or varmint hunting out on sagebrush flats. Manufacturer model #: 90629. - $1,249.99