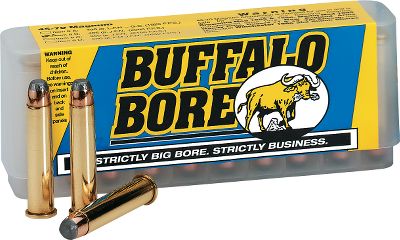 Buffalo Bore ammunition has taken factory-loaded ammunition to a new level of performance. By loading this ammunition up to maximum SAAMI specification guidelines and by using special imported non-canister powders, Buffalo Bore is able to make other commercially loaded ammo seem anemic at best. This ammo, loaded with a variety of high-performance hunting bullets from LBT-designed hard-cast lead to jacketed hollow points, has proven to be devastating on game from varmints to Cape buffalo. Per 20. WARNING: This ammunition is intended for use only in firearms for which it is chambered with some exceptions. Check the list below for exceptions. If no exceptions are listed, use this ammo in any gun in working condition for which it is chambered. .35 Remington: For use in Marlin Lever-actions, T/C Encore, Remington 760 and all bolt actions. .45-70 Magnum: For use in Browning 1885 and 1886, Marlin 1895 made since 1972, New England Arms Handi-Rifle, T/C Encore, any Winchester 1896 made since 1900 and any falling block rifle made since 1900. Do not use in trap door action of any make. Type: Centerfire Handgun. - $39.88