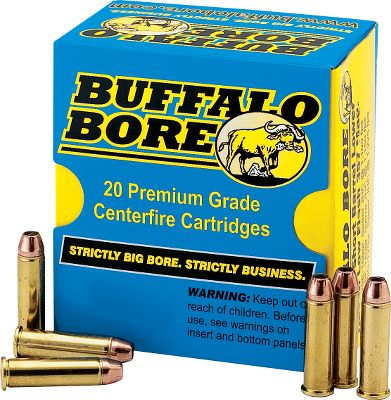 If youre a serious handgunner, this ammo is what youve been wishing for. Buffalo Bore takes factory ammunition to a new level of performance. By loading to maximum SAAMI specification guidelines and by using special imported non- canister powders, Buffalo Bore makes other commercially loaded ammo seem anemic at best. Plus, its loaded with a variety of premium bullet types for hunting and personal defense, including sledgehammer-potent Hard-Cast Lead Flat Nose (HFN) bullets for popular concealed-carry chamberings. Per 20. WARNING: This ammunition is intended for use only in firearms for which it is chambered with some exceptions. Check the list below for exceptions. If no exceptions are listed, use this ammo in any gun in working condition for which it is chambered. .45 Colt: Use only in Ruger, Colt Anaconda and Freedom Arms revolvers, T/C, Winchester 1894, Marlin 1894. .44 Mag.: Use only in Ruger Redhawk/Blackhawk, Colt Anaconda, Freedom Arms and Dan Wesson Revolvers. Use in all SW revolvers made since 1989. Use in T/C, Winchester 1894 and Marlin 1894. .44 Remington Magnum +P+: Use only in Ruger Super Blackhawk, Vaquero, Redhawk, or Super Redhawk models, Freedom Arms model 83, Taurus Raging Bull Dan Wesson revolvers, Thompson/Center Encore, Winchester 1894 and Marlin 1894 rifles, the HR Handirifle and any rifle with a falling block action. .44 Special: For use in every .44 Special and .44 Magnum handgun or rifle except Charter Arms Bulldog. Type: Centerfire Handgun Ammunition. - $21.99